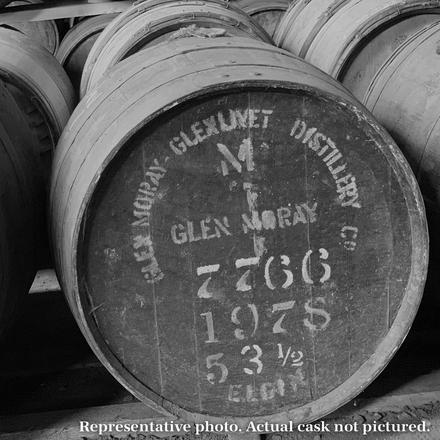 Glen Moray sits just outside the Speyside town of Elgin, held by some to be the capital of Scotch whisky. Every distillery needs good access to water to make their malt, but this is a lesson that Glen Moray may have taken too much to heart. The Lossie river is its water source, and is so abundant with water that until 2009 it regularly flooded the distillery. A new flood defense now protects Glen Moray, and their use of excellent Lossie water makes for a soft, fruity and delightful whisky.

This whisky was distilled at Glen Moray in June 2015 and so has had over 6 years of maturation in this First Fill Bourbon Barrel. At last regauge in 2021, it had an ABV of 61.60%, indicating that it has the potential for many years more of maturation. Having started life as a brewery, Glen Moray was converted into a distillery in 1897, and has really found recognition as a single malt since La Martiniquaise took ownership in 2008. Since the distillery is known for whisky that is smooth, light and fruity, Glen Moray matured in a First Fill Bourbon Barrel is sure to produce a dram that is a real treat for the palate.

Bourbon barrels are a staple of Scotch whisky production and the example we have here is a First Fill; the cask is undergoing its first use in the Scotch Whisky industry, while the cask is at its freshest. Glen Moray distillery is owned by a French company, La Martiniquaise, who have almost 90 years experience distributing fine wines and spirits. La Martiniquaise also owns Old Virginia bourbon so we can say with some confidence that this cask likely held this spirit before it was first filled with Glen Moray spirit back on June 3rd 2015.

Glen Moray’s geography is no fluke – the distillery was converted from The Elgin West Brewery in 1897, meaning alcohol production has been taking place on this site since 1831. The distillery’s proximity to the powerful and fast flowing river Lossie, its water source, means it has consistent access to extremely clean water to use in distillation.Glen Moray employs a 60 hour fermentation time which results in a light and fruity spirit, typical of its Speyside surroundings and lending itself superbly to ex-bourbon cask maturation.

Only five master distillers had managed the spirit of Glen Moray in the distillery’s history when this cask was filled in 2015, each leaving their own distinct mark, while maintaining the historic distillery character.

“The small number of master distillers has ensured a consistent approach, but at the same time allowed each the time to impart their own character and personality on the distillery and the spirit.”

The master distiller responsible for the spirit we have in this cask was Graham Coull, whose career in the whisky industry began with William Grant and Sons in 1994, before he went on to manage Glen Moray from 2005 for 14 years and saw the distillery undergo two expansions and a completely revitalised core range. Coull was perhaps the master distiller out of the five who saw the largest development of the distillery during their tenure.

This cask is an outstanding example of a first-fill ex-bourbon barrel cask from a distillery that is growing massively in popularity in the single malt market. Glen Moray’s light and fruity character lends itself superbly to ex-bourbon cask maturation, especially first fill. The filling strength at Glen Moray is 63.4% meaning that this cask at almost 6 and a half years old has only lost 1.8% of its alcohol strength; this is very positive and hints to this cask being able to mature for many years to come.

This auction is being hosted in collaboration with Spink in London. In order to bid, please visit https://live.spink.com/lots/view/4-49OFEA or click the button below.