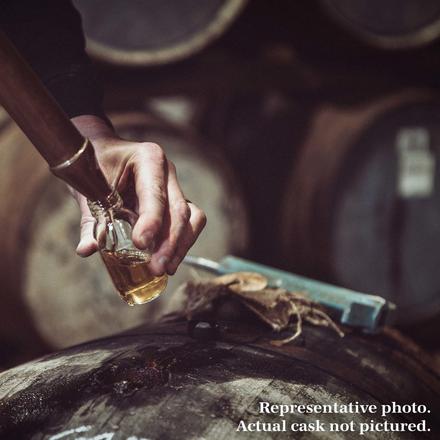 One of the sparks that lit the touchpaper on the Scottish Industrial revolution, the Adelphi weaving mill in the Highland town of Doune continued to process textiles until the 1960s. The Deanston distillery moved in soon after and has been using the hydropower that once drove the mill to help make their whisky. Deanston is a full-bodied, slightly waxy Highland malt, which matures lovely floral and nutty notes when given time.

Deanston spirit is typically matured in ex-Bourbon casks, complementing the unpeated spirit, which is often described as full-bodied, sweet and a little waxy, with notes of heather and honey; very typical of the Highland style. Having started its life as a weaving mill, Deanston makes great use of the fast-flowing River Teith – both as an excellent source of granite-filtered water, but also as hydropower for the distillery. All of its energy is generated by a turbine house, processing 20 million litres of water an hour. Excess electricity is sold to the National Grid, making Deanston one of Scotland’s greenest distilleries.

Deanston is one of the most traditional distilleries left in Scotland and their wood policy follows this tradition, with the vast majority of the waxy spirit produced being laid down for maturation in ex-bourbon casks. Experimentation of cask finishes and organic whisky has been a theme of Deanston in the last few years and shows a harmonisation of tradition and innovation. This is also a demonstration of Deanston’s desirability in the blending industry – it is extremely versatile.

The water for Deanston’s spirit is provided by the River Teith, which flows over granite, making it very soft and ideal for whisky production. The river’s power is also harnessed to help power the distillery, making Deanston one of the greenest and most sustainable distilleries in the country. Long fermentation time (up to 100 hours) and slow distillation are factors contributing to the desirable and versatile waxy, heathery new make spirit.

In 2012 when this cask was filled, Ian MacMillan was the Master Blender at Deanston – his traditional approach can be seen across a career which began in 1973, meaning when this cask was in his inventory he had already been in the industry for 39 years.

“The people working at these distilleries have such pride and are so proud of what they make … tell me of any computer panel that has that kind of passion for making liquid.”

MacMillan joined Deanston in 1991 and his first task was to resurrect the site after a 9 year closure. This was a monumental task but, in just under a year, the distillery was back operational and has been the backbone of some of the most recognisable blends on the market, such as Black Bottle.

The majority of Deanston’s spirit is still used for the blending industry, however it is starting to gain a following among those looking for examples of uncommon single malts, especially single casks or cask finishes. Many of these one off releases never make it out of the distillery shop; its growing profile means more and more people are visiting Deanston and purchasing these one off expressions. The strength of this cask is remarkable after 9 years, giving it flexibility to continue maturation or to be bottled as a healthy cask strength, single cask whisky.

This auction is being hosted in collaboration with Spink in London. In order to bid, please visit https://live.spink.com/lots/view/4-49OFET or click the button below.